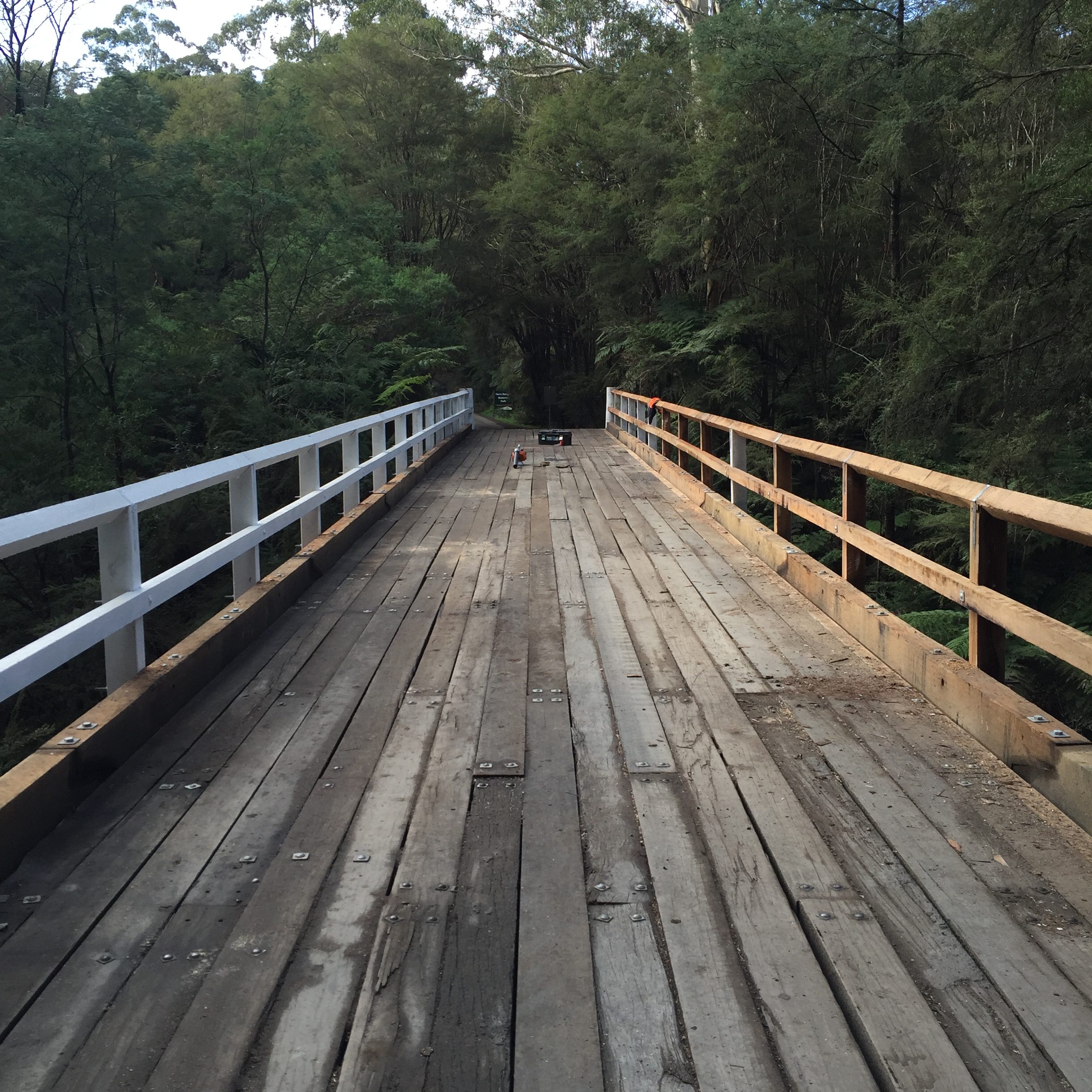 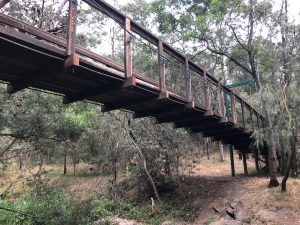 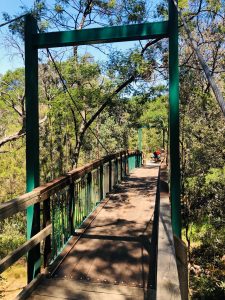 Constructed with steel towers and ironbark decking, joists and handrails.

The jetty is a popular place for Kayakers, wedding photos and the launching place for the Access Dinghies for Sailors with disabilities.

The new floating pontoon will make getting into and out of the yachts easier. 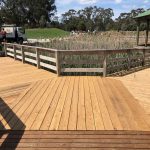 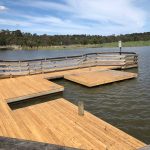 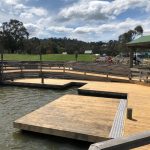 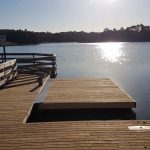 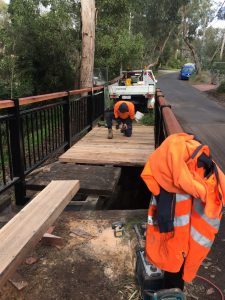 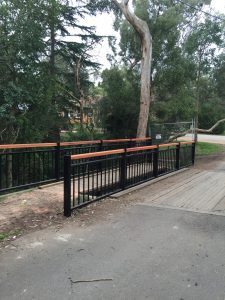 The steel fabrications were taken out in the factory, and sent off to powder coaters to be painted satin black.

The hand rails are made from iron bark, which has a special shamfer for comfort-ability and stained with decking oil. 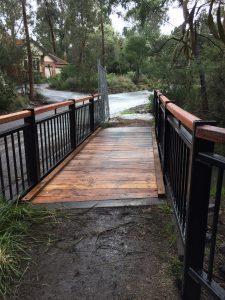 The boardwalk was widened significantly, for the purpose of reducing the amount of steel guardrail in the area.

The decking was finished with a top coat of decking oil and hardwood kick rails were bolted down on top of the deck for safety. 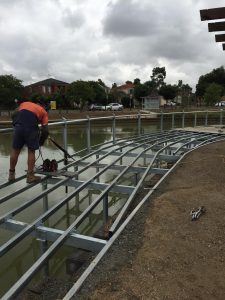 Cope Ag recently finished a large project for the City of Whittlesea, constructing a boardwalk over the lake at Botanica Reserve in Bundoora. 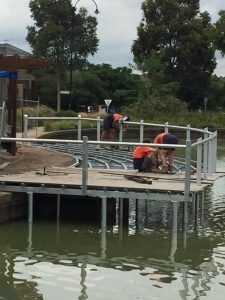 This included, draining a partial of lake, sand bagging it and then constructing the boardwalk using environmentally friendly products.

We refilled the lake once work was completed. 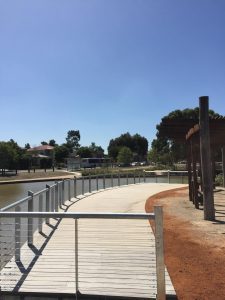 There was a lot of prefabrication that went on in the factory before this job, all the steel posts, joists and stringers were custom made and sent off to be galvanized before we could install them. 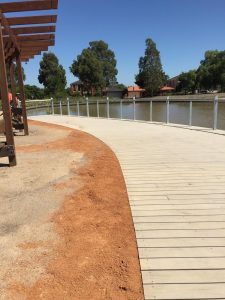 We used a deck called ‘Modwood’ on this project, because ‘Modwood’ is a plastic based product which doesn’t rot as fast as timber. 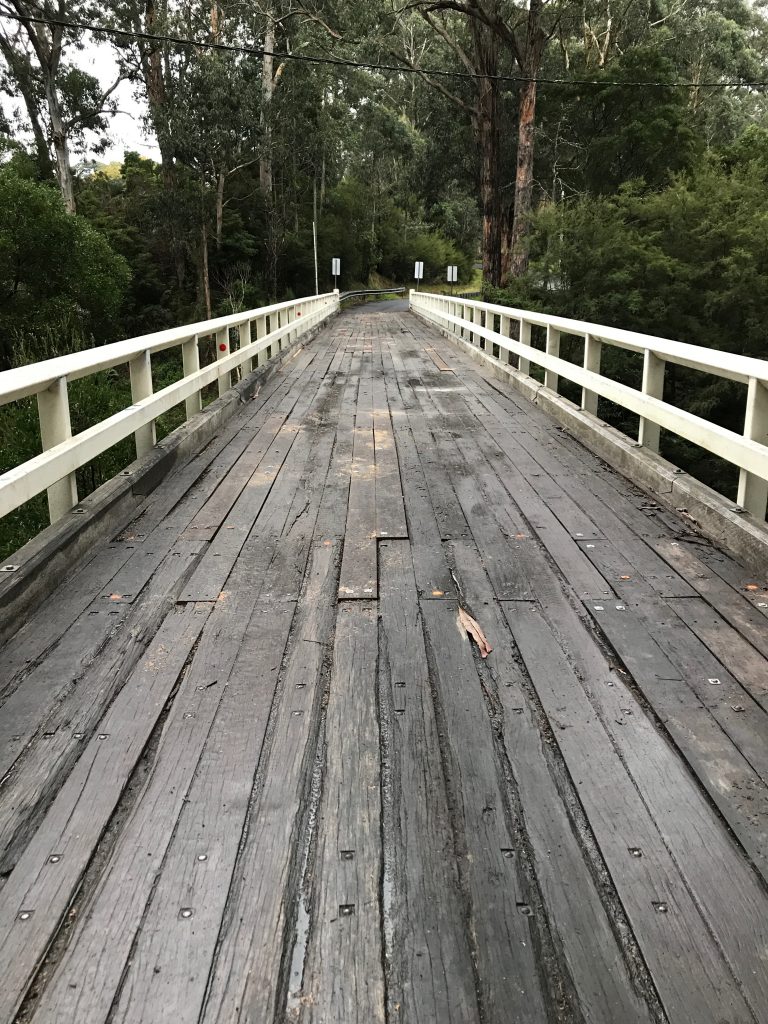 Ruffey Lake Park Footbridge.
The footbridge over the creek replaced an existing bridge. Because the walking track was very popular, we made the bridge off site and trucked it in. This meant the path was only closed for 1 day. The bridge is a 12 metre span of steel beam construction with timber decking and handrails.

Webb St boardwalk in Warrandyte was completed on Christmas eve 2008. It forms part of the walking path that because of the steep terrain and the sensitive environment, an elevated boardwalk was required. Constructed from cypress pine, it sits on timber piles.

A dinky little bridge at Yarraleen Reserve.
This too was designed and built in our yard and craned into position. It is made from galvanized, then powdercoated steel.

Pedestrian Bridge at Barradine Court.
This bridge, although appearing relatively simple, is a multitude of angles. Constructed to be able to take vehicular traffic and comply with Melbourne Water requirements.

Unwin St Boardwalk & Stairway.
Overlooking the Yarra River is this all timber elevated stairway / boardwalk with magnificent views up and down the water and across Odesey House. In total there are 72 steps from Unwin Street Templestowe to the River. Whilst digging the holes for the piles, I found a scorpion about the size of a twenty cent piece. We unofficially call this boardwalk the ‘Scorpion Boardwalk’.

A 200m long environmentally sensitive boardwalk through bushland in vermont.